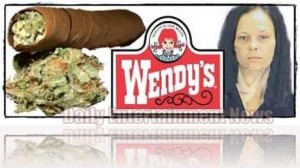 According to TMZ, a Wendy’s employee was arrested last month in Georgia … after allegedly making a cheeseburger with one crazy off-the-menu ingredient … marijuana.

According to the Lovejoy Police Department, 32-year-old Amy Seiber was busted during her shift on November 1 … after a customer called 911, complaining she had found a half-smoked blunt in her cheeseburger.

The customer met with police at the Wendy’s location where she ordered the burger, and cops claim Seiber immediately admitted the blunt was hers.

According to police, Seiber said she had been smoking pot on the job and conveniently “misplaced” the blunt inside the customer’s burger … right on top of the pickle.

The blunt was taken as evidence and Seiber was arrested for possession of marijuana and she was also fired.

TMZ spoke to the lucky customer, who told them she experienced food poisoning-type symptoms after the incident and had to be hospitalized.