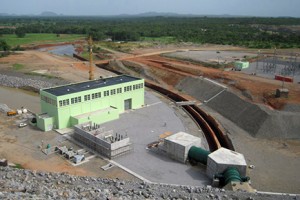 The Federal Government has expressed its determination to complete the N54.3 billion Gurara Dam project in Kaduna State by December, 2014.

Speaking to the NGGT team, Director of the Gurara Water Management Authority, Federal Ministry of Water Resources, Engr. I. Babbaji said that the project could not be delivered on schedule due to a review that was carried out on it following additional components that were added to it over the years, among which are a hydro-power plant and pilot irrigation project.

This, he said, necessitated an upward review of the initial contract sum of N15.1billion to the present N54.3 billion following the approval of the additional sum of N38.5billion by the Federal Executive Council in 2007.

Babbaji said it was foreseen that a 132kv high voltage transmission line of 140 kilometres to Kaduna would be erected to fully utilise the 30 Mega Watts Hydro-power plant, hence the need for the review, while additional roads on right bank to Katari and left bank to Kenyi direction would be constructed.

He assured that the project when completed, would meet the high demand of water by FCT residents.“The Multipurpose Gurara project will satisfy the FCT water demand, produce electricity for Kaduna city, allow development of modern irrigation areas for intensive agriculture in the Gurara valley and will boost the tourism potential of the surrounding communities.”

Babbaji further explained that the project would allow for the development of modern irrigated agriculture, adding that on the basis of the pilot project experience, the final Irrigation Master Plan has foreseen the possibility of realising 12,000 hectares of irrigated surface in the Gurara Valley.

The site engineer, Lainer Denllonze, noted that the lake is about 50 meters deep and 6km downstream with ongoing pilot irrigation project, adding that the system consists of water supply from the dam through feeder pipes.

Responding, the special assistant to the Minister of Information on media, Mr. Kingsley Osadolor, who expressed satisfaction with the progress made at the project site said the Lower Usuma Dam Water Supply project in Abuja, is expected to interconnect with the Gurara River Basin when completed.

He commended the wisdom of the federal government in expanding the scope of the project, which he said could be appreciated when one considers the Dam’s potential capacity to supply water and electricity to the FCT and Kaduna respectively.

He however, added that the benefits of the project would be more appreciated with the present Administration’s Agricultural Transformation Agenda, ATA is fully implemented. [Vanguard]