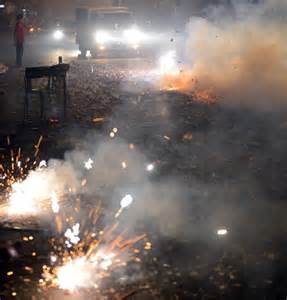 Over 160 people have been injured by fireworks in the Philippines as they prepared to welcome the New Year, the government said Saturday.

A 14-year-old boy who lost his right hand and an elderly man with a ruptured eyeball were among the worst injured so far, Assistant Health Secretary Eric Tayag said.

He tweeted that a five-year-old had also lost his right index finger from using fireworks.

The Asian nation of 100 million people traditionally greets the New Year by making noise in the belief it will drive bad spirits away.

Apart from fireworks, gun owners are another seasonal hazard as they fire their weapons in the air to celebrate Christmas and New Year.

Tayag said government hospitals had tallied 164 firework injuries in the runup to New Year’s Eve, plus one case of a firecracker being swallowed.

“Active fireworks users (are) up by eight percent this year compared to 2012,” he said, without giving figures.

He said one person was also wounded by a stray bullet.

Celebratory gunfire killed a four-year-old boy and more than 400 others were injured by powerful fireworks in the runup to 2013, according to police and health department tallies. [AFP]