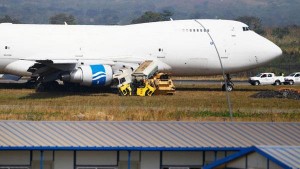 Flights resumed on Thursday at the Nnamdi Azikiwe International Airport, Abuja, about eight hours after they were suspended.

Flights were suspended after a Saudi Arabian Airline B747 cargo plane overshot the runway.

Mr Nnamdi Udoh, the Managing Director of the Nigerian Airspace Management Agency (NAMA), announced the restoration flights after the plane, which was obstructing traffic, was removed.

Udoh told newsmen that flights were suspended to facilitate the removal of the cargo plane from the runway.

“We have just been able to reopen the airport for flights after the removal of the cargo aircraft from where it was. It has been towed away from the runway.

“This was actually done between last night and now with the support of some construction companies,” he said.

The NAMA managing director said the aircraft overshot the runway and added that nobody was injured.

He said that aeronautic engineers and an insurance company would ascertain the level of damage to the aircraft. [NAN]