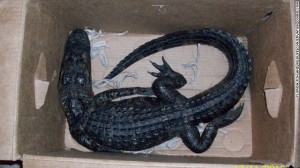 In today’s economy, it’s not uncommon to trade personal items in the marketplace in lieu of cash.

But leave it to Florida to offer the world a truly unusual spin on bartering, when one man walked into a convenience store attempting to trade a 4-foot-long alligator for a 12-pack of beer.

Fernando Caignet Aguilera was cited by the Florida Fish and Wildlife Conservation Commission after a cashier at a local Santa Ana Market in Miami alerted authorities to the attempted exchange.

“Anybody who would conceive this scheme is not thinking properly,” Florida Fish and Wildlife Conservation Commission spokesman Jorge Pino told Reuters.

Aguilera told authorities he caught the alligator in a park. He could face a fine of up to $500 and six months in jail over the incident. Pino said the alligator was not harmed and was released back into the wild.

Aguilera told CBS 4 that he didn’t realize it was illegal to trap or trade alligators in the state. “In my mind, I tried to trade it for some beer,” he said. “Because I had no money. I said, ‘Let me try the alligator.'”

Store cashier Javier Herrera told CBS 4 he “couldn’t believe” someone would try to trade a live gator. “When I (saw that), I tell him to get out of here,” Herrera said.

“This is absolutely bizarre,” Pino told NBC Miami. “I can’t imagine somebody wanting to barter a live, 4-foot alligator for a 12-pack of beer. It makes no sense to me.”