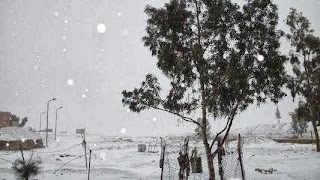 For the first time in over 100 years, a winter storm has brought snow to a city known for its heat and sand, Cairo in Egypt.According to local reports, it happened over night and unexpectedly on Wednesday Dec. 11th. An official of Egypt’s Meteorological centre said it was first time in decades since the last snowfalls and it took residents of Cairo suburbs by surprise. But most are delighted because they have never seen snow before.They took to Twitter to post their amazement in words and shared pictures

The snowfall has forced the closure of the country’s ports and several other businesses for a day now.