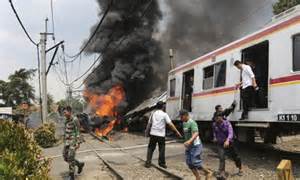 No fewer than four people have been killed when a commuter train collided with a fuel truck near the Indonesian capital Jakarta, derailing a women-only carriage which burst into flames, officials said.

An AFP correspondent saw six people being taken to hospital in ambulances.

Both the carriage and tanker were flipped on their sides and on fire, giving off thick plumes of black smoke.

“Other than the driver, we have not yet identified the victims,” he said.

The train company estimated that around 600 passengers were on the train when it collided with the truck on the southeastern fringe of the capital, Jakarta, but most have been evacuated.

“Injured passengers have been taken to hospital by ambulance and we are coordinating with police and other agencies in the area for the evacuation,” Sukendar Mulya, a spokesman for state-owned train company Kereta Api Indonesia, told AFP.

“The first and last carriages on this train were for women only, so it was the first carriage that collided with the truck,” he said, adding some passengers were still trapped inside.

Mulya said the tanker was owned by state-owned company Pertamina, and that the firm was on the way to assist with the evacuation.

The truck accelerated and drove onto the tracks as the safety boom gate was coming down to halt traffic and allow the train to pass, Mulya said.