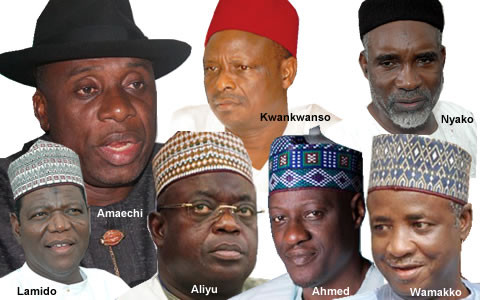 Governor of Niger State and Chairman of the Northern States Governors Forum, Dr. Mu’azu Babangida Aliyu yesterday in Kano said that the G7 governors are still ‘intact’ in spite of the recent defection of five of them from the Peoples’ Democratic Party (PDP) to All Progressives Congress (APC).

While the governors of Adamawa, Kano, Kwara, Rivers and Sokoto states respectively left the ruling party for the opposition owing to what they described as the undemocratic style of the party’s national chairman, Alhaji Bamanga Tukur among other issues, the Niger State governor and his Jigawa counterpart, Alhaji Sule Lamido, opted to stay put in the PDP, thereby leading to insinuations that the once formidable and united G7 governors had fallen apart.

But Aliyu, the self-styled leader of the rebel governors, while on a courtesy visit to Governor Rabiu Kwankwaso of Kano, one of the five that defected, described the G7 as intact and solid, but only pursuing the same objective through different approaches.

“We are still together as one indivisible body. We communicate, exchange ideas and are pursuing the same objective. Our goal is never different, for your information,” he said.

What is playing out now, according to Aliyu, should not be misconstrued to mean that the group is now divided.

Aliyu, who was accompanied by former Governor of Zamfara State, Senator Ahmed Sani Yerima, another chieftain of the APC, declared that nothing can separate him from Governor Kwankwaso.

“All we are doing is a unified idea. We are only strategising towards the same objective,” he stressed.

Kwankwaso lent weight to Aliyu’s submission when he said, “Those of us that went ahead were to chart the way for those we left behind for the political commanders to finish one or two things before joining us. Be rest assured that they will join us.

“We share everything together and people should be rest assured that we are engaging in a political strategy”.