The video of Gov. Oshiomhole asking a widow to ‘go and die’ while on environmental inspection in Benin city went viral some days back and the governor has since apologised for his actions. 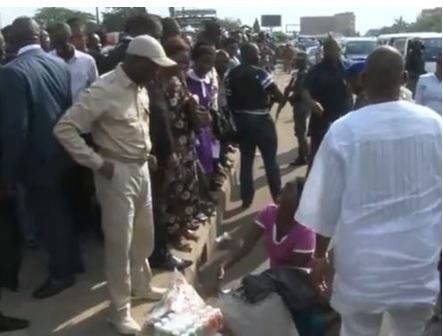 Not only did he apologise, he also compensated the widow identified as Joy Ifije with N2million and also offered her a job.

The governor has been criticised for his actions and also commended for apologising and compensating the widow. However, some people are suggesting that since he is a widower, he should marry the woman.

According to some respondents in Ogun state, the meeting between the governor and the widow may have been occasioned by divine forces. The respondents were of the opinion that, being a widower, there was no harm in the Governor remarrying and that it would be appropriate to marry a widow.

Albert Ashipa, a politician in the state, said, “I am of the opinion and conviction that the meeting and the incident between the governor and the widow, which later attracted public attention, was divine. As we can see today, the governor felt for the woman, had to apologise over the error and even empowered her.”

“From my own opinion, I think God has a purpose for the two of them and there is nothing wrong if the two eventually fall in love, in view of their marital positions. I believe both cannot and should not remain single parents for life,” Adunni Eweje, a petty trader in Kuto market said.

Razaq Ayinla, a civil servant, while commending the governor for his gesture, concurred that the development was God’s doing and advised both the governor and the woman to make good use of the opportunity.

Adesola Adenopo, a resident of Government Reservation Area (GRA) in Abeokuta, in her reaction, noted that biblically, it is appropriate for the two of them to re-marry.

Also commenting, Olanrewaju Dasaolu, a hotelier gave kudos to the governor, for realising his error and correcting himself.