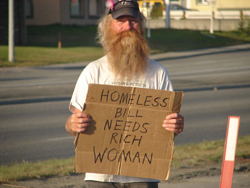 Mike Momany, a former contractor who is now homeless and living in Seattle, is hoping to use the business venture to build awareness of issues affecting homeless people. For good measure, he wants to give 25% of the proceeds to organizations that help the homeless. Sounds pretty admirable, at least until it comes to the cost: $2,000 for the three day tour. Or, in other words, $2,000 more than it takes to actually just be homeless for a few nights.

For the hefty fee, a person can learn the ins and outs of being homeless from a pro. “The dense curriculum includes visits to popular homeless hangouts like the Seattle Public Library and students will be given opportunities to converse with other homeless people, pan handle and nap on benches,” Breitbart reports. Which, if you think about it, is all stuff people could do without forking over enough money to, you know, actually rent an apartment for a month or two.

In fact, at $2,000, it seems like more people would opt instead to take a course in “Applied Caribbean Vacation.” But Momany hopes the course will inspire people to take steps to solving the homeless problem.

Unfortunately for Momany, no one has yet signed up for the course. But hopefully he’ll start attracting some participants soon. As we all know, homelessness can happen to anyone — though probably not to someone who has enough money to fork over $2,000 for a class in homelessness.