Suspected hoodlums, Wednesday, set the palace of the Olofin of Ado-Odo, Oba Lateef Adeniran, on fire, throwing the community in Ado-Odo/Ota Local Government Area of Ogun State in pandemonium.

A portion of the palace located in Isale Ado area of the Awori town had earlier been razed following last April violence that rocked the town, when some hoodlums stormed the monarch’s palace setting the ground floor of the palace on fire before stripping Oba Adeniran and his wife, Olori Fausat, naked. 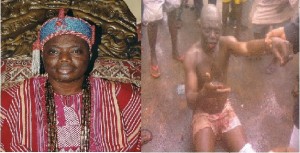 Consequently, the state government set up a commission of inquiry which gave the monarch a clean bill of health and asked him to continue his kingship.

The hoodlums whose motive was said to be frustrating the monarch off the throne however stormed the palace again, Wednesday, to carry out the latest arson.

According to sources, the monarch had been living in exile in Abeokuta since last April following the conclusion of the sitting of the commission of inquiry set up by the state government to look into the crisis.

Ogun State Police Public Relations Officer, Mr. Muyiwa Adejobi confirmed the incident, saying the source of the fire could not be immediately established.

According to him, the Commissioner of Police, Mr. Ikemefuna Okoye, had ordered the state Criminal Investigations Department to embark on a thorough investigation to know the real cause of the fire.