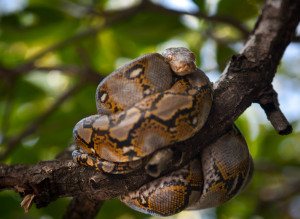 A python strangled a security guard near a luxury hotel on Indonesia’s resort island of Bali on Friday, and then escaped into nearby bushes following the deadly attack, police and a hotel employee who witnessed the incident said.

The incident happened around 3 a.m. as the 4.5-meter (15-foot) -long python was slithering across a road near the Bali Hyatt hotel, said Agung Bawa, an assistant security manager at the hotel, which is closed for renovations until 2015.

The victim, Ambar Arianto Mulyo, was a 59-year-old security guard at a nearby restaurant.

He had offered to help capture the snake, which had apparently been spotted several times before near the hotel, located in Bali’s Sanur area, Bawa said.

Mulyo managed to secure the snake’s head and tail and put it on his shoulders, but the python wrapped itself around his body and strangled him, said Bawa, who was present during the attack.

People watching the incident were unable or unwilling to help and called the police, who came but failed to save the man. The python escaped into nearby bushes, and police were still searching for it.

“It happened so fast,” Bawa said. “We were sad because we could not do anything to help him.”

Yudistira warned people to be alert since the snake was still on the loose in the area, which is popular with tourists.