Salami Olapade is totally inebriated by the time he completes his first round trip of the day, conveying passengers in his rickety 14-seater bus along the Oshodi-Mile Two route. 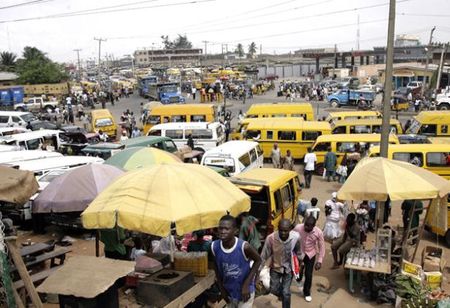 Before starting his morning run, Mr. Olapade buys five sachets of schnapps which, according to him, helps keep him awake when he gets stuck in traffic, a sure thing during the early morning rush hour along the route.

“I drink a sachet once in a while to keep awake, especially in the morning, because I work late hours. By the time I finish the five sachets, the sleep will completely disappear from my eyes and I can concentrate very well,” the driver said in Pidgin English.

At the Ojuelegba Park, Chikelue Anioma gives a slightly different reason for the amount of alcohol he takes while at the steering.

“I usually take two shots of ‘mgborogu’ (local herbs steeped in gin) before I start my first trip of the day but it does not affect my driving,” he said in Pidgin English.

With the proliferation of small sachets, and miniature bottles, of different brands of alcoholic drinks in most of the motor parks in Lagos, the city’s commercial bus drivers, notorious for their short tempers and uncivilised behaviour, have an extra reason to be unruly. Most motor parks in the Lagos metropolis are popular haunts for hawkers of these drinks thus contributing to the increase of cases of drunk driving and road rage by commercial motorists.

The growing popularity of traditional medicine, and the use of herbs, has also contributed to this trend since most of these herbs are usually steeped in local gin.

The sellers are drawn to the motor parks because the commercial motor and motorcycle drivers constitute the greater part of their clientele. Most of them admitted that business was good.

“My elder sister urged me into this business and I’m happy I followed her advise because this is definitely more lucrative than the tomatoes I was selling before,” said a trader at the Ojuelegba Park.

She added that she makes an average of N3,000 in profit on a good day by offering various brands of both sachet and bottled alcoholic drinks.

A survey at the Oshodi area revealed that sellers of the herbal drugs, steeped in alcohol, attend to a steady stream of customers made up of commercial motorists and touts.

Below is the reference information on various stages of alcohol intoxication.