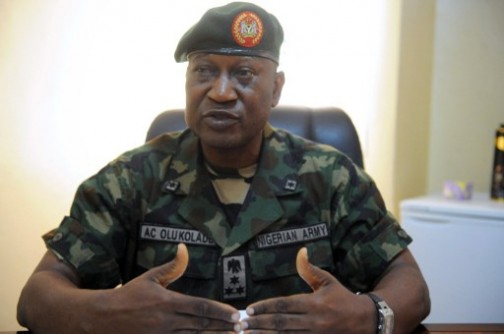 The operation took place in the same area, where an attack on a military barracks occurred about two weeks ago.

According to Thisday, the military engaged the insurgents who swarmed the village in large numbers with sophisticated weapons and armoury, including armoured personnel carriers (APC), mounted with anti-aircraft guns , after being dislodged from Bama and other towns in which they previously launched failed attacks.

A military source further revealed that the insurgents, who had some foreign assistance, were successfully repelled by the Nigerian military. The Army was supported from the air following the deployment of Alfa Air Force jets from Adamawa State.

“Those guys [insurgents] entered Alafa village Sunday morning, but were caught in a surprise military attack and air bombardment.

“The Boko Haram men, many of them came with APCs mounted with sophisticated anti-aircraft guns. However, Alfa jets from Adamawa arrived to support the ground forces.

“What we are witnessing now is that the terrorists have acquired more sophisticated weapons, as they are no longer using riffles but anti-aircraft guns.

“However, special forces have also been deployed from different parts of the country to Borno for some surgical and highly specialised operations,” the source said.

Maj.-Gen. Chris Olukolade, the Director of Defence Information (DDI), said that weekend’s battle was a part of the ongoing offensive against the insurgents who month had attacked some military locations including Bama Barracks and the Nigerian Air Force Base, Maiduguri within the last month.

“There was intensive fighting yesterday but initiated by our own forces in ground and air operations on the terrorist location spotted at Alafa about 21 kilometres from Bama. It is part of ongoing efforts in search of the terrorists as guided by intelligence.

“The operation was able to inflict vital heavy casualties on the insurgents in that location. Necessary air and land bombardments are continuing in similar locations,” Olukolade stated.

The DDI also confirmed that the mission in the North-East involves specially trained forces.

Maj.-Gen. Olukolade pointed out that the latest posting and redeployment of senior officers was meant to achieve the desired targets of operations in the North-East and other areas of the country that are facing internal insurrections.

Share
Facebook
Twitter
WhatsApp
Previous articleHOW SWEET: You’ll Not Believe Melvin Oduah’s Celebrity Crush PLUS See What He Says About Her (PHOTO)
Next articleOUTRAGE: “2013 Almost Over, Where Is Our Money, Governor Mimiko?!” – NYSC members
- Advertisement -