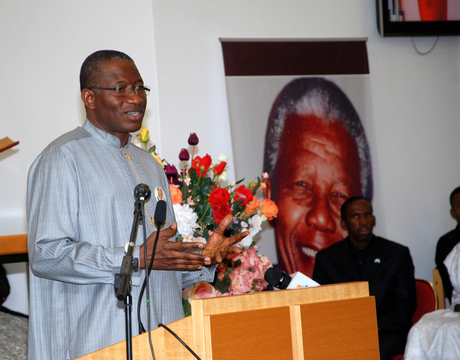 Okupe, who is the Senior Special Assistant to the President on Public Affairs, refuted media reports, especially in the social media that he equated Jonathan to the late Mandela, saying it was an invention by some individuals whose motive, he said, was to mislead unsuspecting users of social media.

“I check (sic) through the history of Nigeria among our past and present leaders, the only one we can call our Mandela is President Jonathan. There is no President in Nigeria that has sacrificed 13 hours to discuss with ASUU,” Okupe was quoted as allegedly saying in the statement which drew widespread condemnation.

But in a statement signed by the Head of Media in his office, Mr. Bamidele Salam, Okupe while giving a background to this statement purportedly likening President Jonathan to the former post-apartheid South African President, said the AIT programme where it was alleged that he made the statement was recorded at about 5pm on Thursday, November 5, whereas the death of Mandela was announced almost four hours later.

He, therefore, wondered how he could have spoken about a living Mandela as if he were dead and then compared him with any other person.

“It is clear that the authors of these false quotes are linked by the same desire to mislead innocent members through a consistent pattern of published falsehood in a manner as to portray Okupe as an enemy of adherents of a particular faith, geo-political zone or some other noble causes in the polity”, Salam’s statement read in part.

Salam expressed dismay that many online commentators believed what he described as false publication and continued to make disparaging comments in response to the untrue posting.

He also alleged that a group, known as Arewa Vanguard on Facebook, which he said started the trend of crediting false statements to Okupe, had also lied by quoting the presidential aide as saying at a press conference that the ongoing strike by the members of the Academic Staff Union of Universities was being sponsored by a former Head of State, Gen. Muhammadu Buhari (rtd.) and a former Governor of Lagos State, Bola Tinubu.

He also recalled that the Arewa Vanguard had once quoted Okupe as attributing terrorism to Muslims and Islam, thereby, portraying him as a religious bigot.

Salam said the statement was obviously from the imagination of the author, who he said, had misled a number of people into making invidious remarks about Okupe, whose statements about the ASUU strike, according to him, are always signed and presented to the media.