Home News Feed “I Was Right To Kill My Boy” – Woman Opens Up On...
Facebook
Twitter
WhatsApp

Every night of the five years she spent in prison for murder, Frances Inglis went to sleep thinking of her son Tom and the 22 years they shared before she ended his life.

She wept inconsolably as she recalled the image of her son’s once‑perfect face horribly deformed by the emergency surgery that saved his life after a freak accident left him with catastrophic head injuries.

‘Seeing my darling son like that was pure hell,’ says Frances, her voice breaking. ‘It was like watching someone you love being captured, held to ransom and tortured every single day. It was horror, nothing but endless horror.

‘So in prison, whenever I asked myself: “Did I do the right thing?” I made myself think of Tom in  that terrible state, alive but with no life to speak of, and I felt at peace that I was able to release him from his suffering.’

Frances, 61, loved Tom with all her heart. She gave him life. But it was she who – in a desperate and shocking act – ended it, convinced it was what her son would have wanted. 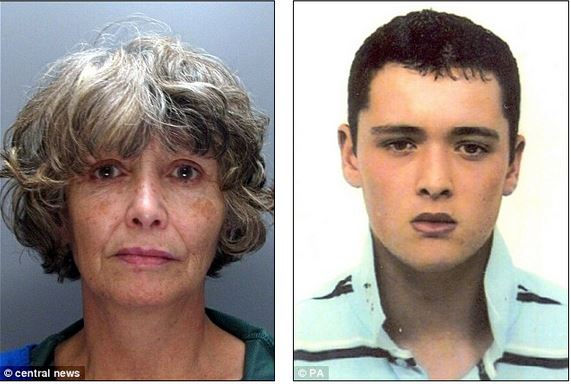 In her mind it was a ‘mercy killing’. But in the eyes of the law it was murder, and in January 2010 Frances Inglis was found guilty by majority verdict and sentenced to life, with a recommendation she serve at least nine years (reduced to five on appeal).

Keeping him alive, she insists, was ‘inhumane’. To allow Tom to die by consenting to the withdrawal of food and hydration would have been, in her mind, ‘a cruel torture’.

She is only speaking out now because she believes the law needs urgent review. How can it be, she asks, that she was treated more harshly than other killers driven by baser emotions?

So were these the compassionate actions of a loving mother – or, as prosecutors successfully argued, the criminal act of a woman deranged by grief, projecting her own suffering on to a young man unable to express his own wishes?

‘I gave my son a merciful death,’ says Frances. ‘I knew what I was doing was wrong in the eyes of the law; it felt right for my son.

‘I couldn’t bear for him to continue like that, and I know he wouldn’t have wanted to be kept alive in that condition.

‘Tom was a physically fit and healthy young man. He could have lived for another 40 years lying in a bed in that vegetative state. I would have done anything and accepted any punishment to release him from that suffering and to see my son at peace.

‘It wasn’t done in anger, it was done with compassion and love, and to this day I don’t regard what I did as murder.

‘All I wanted was for Tom to have a painless death. He passed away peacefully in my arms. The last words he heard were from me, his mother, telling him that I loved him.

‘If Tom had been left with some quality of life, I would have supported keeping him alive 100 per cent because the care he was receiving from nurses was wonderful.

‘I’ve worked with people with learning and physical disabilities and there can be a lovely quality of life. But there are different degrees, and Tom’s disability was profound.’

It was in July 2007 that Tom Inglis, a pipe-fitter from Essex, suffered catastrophic head injuries after jumping from a moving ambulance.

He was being taken to hospital having suffered a split lip and concussion when he tried to break up a fight outside a pub in Dagenham, Essex.

Frances, who at the time was re‑training as a nurse, first tried to kill Tom in September 2007.

‘I wanted Tom’s death to be painless, peaceful and quick,’ says Frances. ‘I researched on the internet and thought that with heroin he would float away. I thought it would be a kind death.’

‘I didn’t know where to get it from, so I hung around needle exchanges asking people coming out where I could buy heroin.

‘But they were suspicious of me and must have thought I was an undercover police officer.

‘In the end I went to King’s Cross in London and asked people who looked like they were dealers if they knew where I could buy heroin. It wasn’t easy and took quite a long time before someone, in the end, said: “How much do you want?”

‘All the time I was thinking: “What am I doing?” But when I thought of Tom’s terrible suffering, I knew I had to go through with it for his sake.

‘Injecting heroin into my own son was the worst thing I’ve ever had to do, but I did it because the thought of walking out and leaving him in that condition was unbearable to me.’

Frances stayed with Tom while he drifted into unconsciousness, whispering into his ear: ‘Everything will be fine.’

She left his room thinking he was dead. But once she’d gone, he suffered a cardiac arrest.

The medical team, responding to monitor alarms, resuscitated him, but Tom was left with even more profound disabilities as a result.

‘I was in a terrible state when I found out they’d brought him back to life. Why couldn’t he have been left at rest?’ asks Frances, who was arrested two weeks later on suspicion of attempted murder when tests revealed the heroin in his body.

‘When the police questioned me I denied everything. I wanted to tell the truth, but I knew that if I did, I would never get the chance to release Tom. I think they knew I’d done it, but there was no proof.’

Frances was released on bail on condition she did not see her son. She says the 14 months when she was prevented from visiting him in hospital were “pure hell”, thinking about what he must be enduring.

When Tom was transferred to a rehabilitation unit in Hertfordshire in the spring of 2008, Frances became tormented by the thought that medical staff might, if he deteriorated further, seek to apply to the High Court to let her son die by withdrawing food and hydration.

So in November that year she secretly visited Tom, pretending to be his aunt, knowing the staff there wouldn’t recognise her.

Armed with another syringe filled with street heroin, she injected her adored son. This time she was successful.

‘I was terrified, absolutely terrified that I would be stopped and that they would resuscitate him again. I couldn’t live with that, or for Tom to continue living with this awful suffering,’ says Frances.

‘The door to his room had to stay open at all times, so I had to pretend to act naturally for the 15 minutes we were alone together.

‘As Tom was dying, a nurse came in to give him some medication. I ushered her out telling her to leave it till later.

‘Then I closed the door, super-glued the lock and barricaded myself in to stop them from resuscitating Tom.

‘I told them to call the police. I was panicked and anxious, but the moment Tom passed it felt like a burden had lifted. It was such a relief to know that he was at peace.’

‘I grieve for Tom every day, but I don’t see myself as a murderer,’ says Frances, who compares herself to a soldier who compassionately puts a fallen comrade out of his misery on the battlefield rather than let him suffer.

‘Tom’s at peace now, and that’s all that really matters to me.’