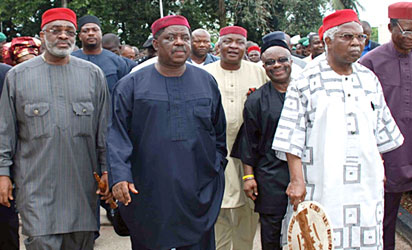 A cross section of Igbo leaders in the South East geo-political zone met in Enugu on Thursday to build a consensus in preparation for the proposed national dialogue.

Speaking during the Igbo Political Summit organised by the South East Peoples Development Association, the National Chairman of the association, Sam Egwu, said it was to harmonise a common and strong voice at the confab.

Mr. Egwu, a former governor of Ebonyi State, said the summit would also draw a road map for the 2015 general elections.

“We want to come together so that we can have a common voice on issues concerning our zone at the forthcoming national conference.

“We do not want a situation where the zone will have divided opinions.

“Other zones are working tirelessly over this issue so, we want to harmonise the position of the South East,’’ he said.

Also speaking, the President of Ohaneze Ndigbo, Gary Igariwe, lamented the lack of cooperation among some Igbo leaders over the conference.

He pledged to work with other stakeholders from the zone to represent the interest of the people.

A frontline politician, Mbazurike Amechi, urged the people of the zone to harmonise their views in fairness, equity and justice.

In a speech, Prof. Uche Azikiwe, the wife of late Nigerian President, Dr. Nnamdi Azikiwe, appealed to the stakeholders to represent the interest of women during the conference.

“We must involve women in all the things we are doing especially in the forthcoming conference,’’ she said.

The News Agency of Nigeria (NAN) reports that issues that were discussed at the summit included state creation, citizenship and state police.