Iheanacho: Greed Of A Father And An Agent

Our elders say that a dog destined to die ignores the whistle of the hunter while a hunter that chases two games at the same time may end up not catching any. 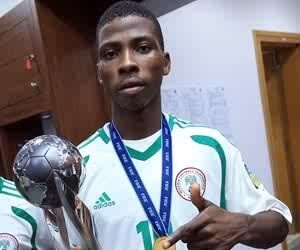 That is the true position of Golden Eaglets hero Kelechi Iheanacho, his father James Iheanacho and his unnamed agent. Since the player shot into limelight, his father and the agent in particular have displayed their hunger for money at the expense of the boy’s career which should be uppermost in their mind.

The young lad announced his arrival at the world stage the moment he netted four goals past Iraq in his match at the FIFA U-17 World Cup in the UAE last August. He ended up becoming the Most Valuable Player of the competition as well as the second highest goal scorer. Kelechi and his team-mates from the beginning of the competition to the end stunned the world with their mastery of the game making Nigerians to now see them as the future backbones of the new Eagles Stephen Keshi was helping to mould.

This prompted the NFF and the sports minister, Mallam Bolaji Abdullahi announce that the boys would be groomed to becoming great materials for the senior national team by ensuring they don’t jump into wrong hands masquerading as agents of clubs around the world. However, signs that some parents of the players would mislead the boys because of their greed came to the fore in a hilarious chat the NFF president, Alhaji Aminu Maigari and the sports minister, Mallam Bolaji Abdullahi had with one of the parents which veteran sports journalist and CAF/FIFA match commissioner, Paul Bassey published in his column recently.

Every plea to the parent that his child would be guided to stardom so that the money he is earnestly yearning for will roll in effortlessly fell on deaf ears as he was interested in how much the various governments, local, State and Federal as well as companies and individuals were ready to splash on the players, because as he claimed, he spent a fortune preparing his son to be the good player he turned out to be for the benefit of the country. Then came the supposed ‘scramble’ for Kelechi and the swiftness with which his father turned a football coach, agent and manager. It is not on record that he had ever done those jobs to be an expert in offering a positive advice to his son.

Those who should know, from Kelechi’s coaches like Nduka Ugbade and Emmanuel Amuneke and ex player of note, Victor Ikpeba, advised that the boy should not be rushed into Europe, especially to Manchester City football club but allowed to hone his skills in lesser clubs in either Belgium or Holland and the senior Iheanacho and the agent would have none of it.

Keshi magnanimously invited Iheanacho and two of his team-mates, goalkeeper Dele Alampasu and Taiwo Awoniyi into the Super Eagles Team B preparing for the CAF African Nations Championship, CHAN holding in South Africa in January and they were already warming their way into Keshi’s with their mature display at training. Suddenly this desperate agent sauntered into the Eagles camp to ask for the release of the football prodigy, a request Keshi turned down but the agent’s accomplice, Kelechi’s father, we were told, put a call to Keshi, ordering him to release his son to the agent. And Keshi did.

Today, the desperation to get Kelechi fast-tracked into Manchester City is gradually turning sour in their mouth. First the news came that Man City wanted to send him to an Academy it is affiliated to in Ghana, a decision most Nigerian fans frowned at, asking if the England club has no Academy of its own in Manchester. Then came another clause attached to the whole arrangement. That is the club would not release any dime to Kelechi, his father nor the agent until the boy turns a full adult as the laws of England does not allow an under-17 to be paid salary, I guess.

This is reported not to have gone down well with the senior Iheanacho and the agent who feel that they can’t afford to wait until late 2014 or early 2015 to start earning the big bucks, from the sweat of the innocent player, whose career is seriously being threatened now by the desperation of two adults. I ask, why would Kelechi’s father want to collect some percentage from the contract? As father of the player, will he not get a piece of the boy’s earnings when it eventually start rolling in?

He should have learnt from the parents of other young players who became bread winners of their families after they hit it big in Europe by taking their time to grow. The list of desperate young players who wanted to run before they walk is too long to be put down here and their experience should have guided Kelechi’s agent and his father to be patient as the reward would surely come.

They should also have allowed Kelechi to participate in the CHAN were he would most probably have put up a display that will help raise his profile more because clubs would see that he could also make an impact in a senior team. But as it is now, if misses the Man City deal, can Keshi still accommodate him in his CHAN plans? I doubt. It is still not too late for them to have a change of heart and listen to Amuneke, Ikpeba, Maigari, the sports minister and our own Paul Bassey who at various times offered a piece of advice.

If Nwankwo Kanu, Wilson Oruma, Jonathan Akpoborie, Joseph Yobo, Mikel Obi as well as a host of others had been too desperate to run to big clubs because of fat bucks, may be they would have been gnashing their teeth like a whole lot of others now stranded in Europe playing Sunday-Sunday street football or washing dishes in some obscure restaurants and too ashamed to return home. So be wise Kelechi, talk to your father and his agent friend.