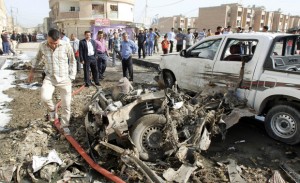 At least 30 people have been killed in a series of bombings in and around Baghdad, security and medical officials have said.

The blasts, which hit eight areas of Baghdad and a neighbouring Madain town on Sunday, also wounded at least 57 others, the sources said.

The deadliest attack was a car bomb that exploded inside a mechanic’s shop in the Bayaa area of south Baghdad, killing at least seven people and wounding 14 others, police said.

Another car bomb in a commercial street in central Baghdad killed four more people, while in the eastern Ghadeer district another car bomb near a government tax office killed six people and wounded 22, authorities said.

In the Husseiniyah neighbourhood, a car bombing near a restaurant killed three people and wounded 13. Another car bomb near a small market in Baghdad’s Shia slum of Sadr City killed two, while a blast in a crowded marketplace in the primarily Shia neighbourhood of Amil killed five more.

One bombing struck the Sunni neighbourhood of Radhwaniya, hitting a row of shops and killing two people and wounding eight, police said.

Also, an off-duty army officer was killed when a sticky bomb attached to his car exploded as he was driving near his house in Madain town, just south of Baghdad, police said.

Violence in Iraq has reached a level this year not seen since 2008, when the country was just emerging from a brutal period of rampant sectarian killings. Nearly 950 people were killed in the month of November alone.

Members of Iraq’s Sunni minority, who complain of discrimination at the hands of the Shia-led government, have held frequent large demonstrations during the past year.

The government has made some concessions aimed at placating the Sunni community, including freeing prisoners and raising the salaries of anti-al-Qaeda fighters, and has also trumpeted security operations against fighters.

But daily attacks have shown no sign of abating, and violence has killed more than 6,250 people since the beginning of the year, according to AFP news agency figures based on security and medical sources.