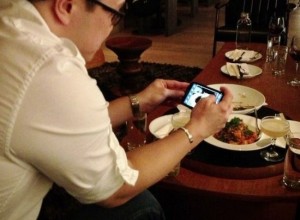 Restaurant owner Jawdat Ibrahim is making his patrons an offer they cannot refuse – switch off your mobile, reduce your bill by half.

Ibrahim thinks smartphones have completely destroyed the dining experience. “Technology is very good. But just when you eat, just especially when you are with your family and your friends, you can wait for half-an-hour and enjoy the food and the company,” he says. “A lot of people, they sit down and they don’t enjoy their food.”

I must admit he does have a point there. These days, almost everyone looks more at their phones than the people beside them. Ibrahim is dismayed when he sees married couples or friends sitting in silence, staring at their screens and finally asking for their food to be reheated.

So he hopes that the generous discount will help people return to a time when having a meal together meant having a good time and a real appreciation for food. “I’m changing something,” he says. “It might be something small, but maybe in some small way I’ll be changing the culture of eating.”

While this gesture is truly amazing, I do feel 50 percent is a bit over the top. There have been other restaurants offering similar discounts, but something like 10 percent. How can Ibrahim afford such a huge discount? Wouldn’t everyone switch off their phones just for that?

Well, it turns out that he has a clear strategy in mind. He does admit that he is taking a financial hit, but in the long term, he hopes to attract more customers to his restaurant. Also, Ibrahim started the restaurant in 1993 after he won the $23 million Illinois State Lottery in the 1980s. So maybe this is a move he can afford, after all.

It appears to be paying back, too. Tourists and locals are paying a visit, just to see if the discount they heard of is really true. “I have a lot of new customers,” Ibrahim said. “People come from Jerusalem. People come from Tel Aviv, and they all have one thing in common: This telephone is not good for me when I am eating.”

Hagit Netzer, a 63-year-old tourist from northern Israel, stopped by last week. “What’s the big deal if you don’t use your phone for half an hour?” she asked. “I wanted to see if it was really true.”

She and her daughter switched off their phones, and when they received the bill, it was just 79 shekels instead of the original 158 (about $45). Netzer was pleased. “I wonder what’s in it for them. I can’t believe they really do it for 50 percent,” she exclaimed.

Ibrahim’s restaurant is located in an Arab village 10 kilometers outside of Jerusalem. He’s been in the news before: once, when he won the lottery, and then again in 2010, when his restaurant made the Guinness World Record for the largest plate of hummus. It was a humungous four ton preparation, served up in a satellite dish. Ibrahim has also tried hard to use his status to promote coexistence between Arabs and Jews.