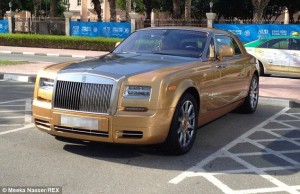 Dubai, United Arab Emirates – Judging by the car park at the American University of Dubai, students here are not going to struggle with making ends meet. Luxurious cars line the student car park row after row. Student Meeka Nasser wanted to show the world the array of models on show at the university, so he snapped a few photos.

He said: “I attend the American University of Dubai, and the cars that students drive here are just ludicrous. If I was back home in Canada, my car would be considered nice, but here nobody looks twice at it.

“These pictures were taken in the span of a couple days and only in one of the parking lots of the school, so this isn’t even close to all of the nice cars at the school. Because Cayennes and Range Rovers are a dime a dozen here, I only included a few of them in the album.

“Keep in mind, almost all of the students are between 18 and 24 years old, as the graduate programe is pretty tiny here. The students that drive the insanely expensive cars (Rolls Royces and Bentleys etc.) are usually local (Emirati) for those wondering.”

The American University in Dubai is a private university which was founded in 1995. It offers both undergraduate and graduate degrees and a Certificate in Middle Eastern Studies.

Brace yourselves, here we go:

This Rolls Royce is parked next to Maserati both of which would set you back more than N25,930,452

Porsche Cayenne GTS, worth about N18,151,316, and a Ferrari parked next to each other

While most dream of one day owning a car like this, a student drove this black Audi R8 to university

A Dodge Challenger which costs about N4,180,248 is one of the less expensive models on the site