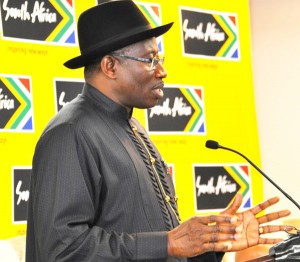 President Goodluck Jonathan, who just returned from a visit to Germany and France will Monday evening leave Abuja to join other world leaders in South Africa at events leading up to the burial of former President Nelson Mandela on 15 December, where 59 world leaders are expected.

According to a statement by the special Adviser to the President on Media and Publicity, Dr Reuben Abati, Sunday, President Jonathan will attend the Memorial Service for Dr. Mandela on Tuesday at the FNB Stadium in Johannesburg in the company of the Supervising Minister of Foreign Affairs, Prof. Viola Onwuliri.

The President will, in the company of other Heads of State and Government, also pay his last respects to Mandela at the anti-apartheid hero’s lying-in-state on Wednesday at the Union Building in Pretoria where he served as South Africa’s first democratically-elected President.

After the event in Pretoria on Wednesday, President Jonathan will leave for Nairobi to honour a long-standing invitation to be a guest of honour at Kenya’s 50th Independence Anniversary celebrations.

President Jonathan is expected back in Abuja on Thursday, December 12.