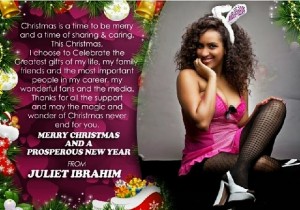 The cards keep coming in!!

Ghollywood actress, model and video vixen — Juliet Ibrahim has followed other celebs in the Christmas tradition.

The sexy half-cast released her 2013 Christmas card, wished her fans and friends a joyful yuletide season.

To be honest, the number of Christmas card this year, seem to be a little fewer than last year’s.