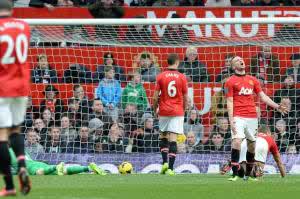 A Kenyan football supporter has taken his own life after Manchester United’s defeat to Newcastle, police in Kenya have said.

28-year-old John Macharia plunged to his death from a multi-storey apartment block in Nairobi after the red devils slumped to a second home defeat in four days, making the champions’ chance of retaining their Premier League title a lot slimmer.

Newcastle’s win at Old Trafford on Saturday was the clubks first since February 1972.

The loss was too much for Macharia to bear after having watched Everton claim their first win in years at Old Trafford, just days earlier.

United are now 13 points behind league leaders Arsenal who fought so hard but could not beat a resolute Everton at the Emirates.

Macharia’s death is not the first of such in Kenya. In 2009, a 29-year-old Kenyan Arsenal fan, Suleiman Omondi, was found hanging in his flat after the Gunners were trounced 3-1 by Manchester United in the second leg of a Champions League semi-final game. United went on to win the trophy that year.

Kibui therefore urged football-obsessed Kenyan fans to support local teams rather than foreign clubs who do not have a link to the east African nation.

“The football fans should enjoy the matches… but they should not commit suicide since life is very precious,” Kibui added.