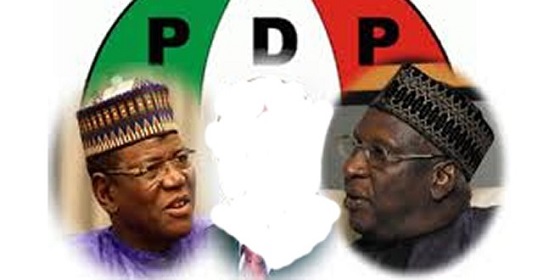 Despite the peace moves by President Goodluck Jonathan to hold together what remains of the ruling Peoples’ Democratic Party (PDP), indications emerged yesterday that all is still not well between the PDP National Chairman, Alhaji Bamanga Tukur and Governor Sule Lamido of Jigawa State.

Gov. Lamido has consistently stated that until Tukur is removed as chairman of the PDP, there will be no peace in the party.

This much was displayed on Wednesday when Senators from the state allegedly staged a walk-out on Tukur, who had visited the National Assembly, to hold a closed-door meeting with PDP Caucus in the senate as part of moves to resolve the PDP crisis.

Although the three senators, just like their governor, are still PDP members for now, they refused to be part of yesterday’s peace meeting, where Senate President David Mark had before going into meeting with Tukur and other PDP senators, admitted that there was crisis in the party but expressed optimism that PDP would come out of it stronger.

Speaking on the incident, Gov. Lamido, who only on Monday was at a meeting with President Jonathan where they reportedly continued talks on how to resolve the crisis in the party and dissuade him from toeing the path of his colleagues that defected to the opposition All Progressives Congress (APC), gave the senators the thumbs up.

His words: “I totally endorse their action and position. All the problems happening in the PDP is caused by Tukur. He is the source of the entire problem in the PDP, therefore, he should be avoided.

“The Jigawa lawmakers do not owe Tukur anything. Instead, Tukur is the one who is indebted to them, because we were already in the PDP before he came. And he became chairman through our own instrumentality. Therefore, we will not attend any meeting Tukur calls. I commend the lawmakers for doing what they did,” Lamido noted.