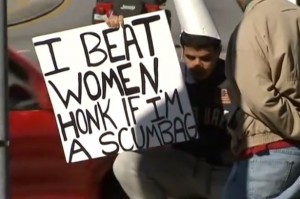 A Florida woman gave the man who beat her up a choice – face criminal charges or public humiliation.

He chose the latter, and wore a dunce’s hat and a sign saying “I beat women” on a street corner for eight hours.

After he refused to stop, Hessler hit Urena – who retaliated, leaving her in hospital with a broken nose and concussion.

Hessler told Tampa Bay Fox News, “I did hit him first and then all of a sudden that’s when he started beating me repeatedly, punching me.”

Hessler contacted police, but did not press charges – instead deciding to contact Urena on Facebook and offer him the unusual ultimatum.

She told him she wouldn’t press charges if he agreed to carry a sign saying “I beat women, honk if I’m a scumbag”, and sitting on the corner of a busy road wearing a dunce’s cap for eight hours.

He agreed and did so.

“I think it will teach him a lesson,” said Hessler. “I think he’ll think twice about doing it again.”