Home National News Odd News Man Gets His Ass Kicked after Wife Had Enough of His Violent...
Facebook
Twitter
WhatsApp 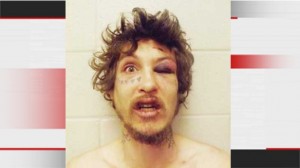 Police in Oklahoma say a domestic violence victim managed to fend off her husband’s vicious assault by roughing him up in return, resulting in this priceless mugshot of the suspect.

Derrick Maynard, 32, of Bartlesville, was drinking whiskey and likely drunk when he began throwing objects at his wife and verbally attacking her.

Maynard’s wife told police her husband then grabbed his unloaded pellet rifle, pumped it several times, aimed it at her, and said, “you deserve to die.”

A court affidavit states that after Maynard began punching his wife in the head, the woman defended herself by kicking him several times in the face.

Maynard then lost his balance, reportedly due to his inebriated state.

Police soon arrived and arrested Maynard on suspicion of aggravated assault with a weapon and threatening to kill.

According to court documents obtained by NewsOn6, Maynard was in the process of completing 52 weeks of court-ordered domestic violence counseling stemming from a September arrest for domestic assault and battery, to which he pleaded guilty.

Maynard will likely remain locked up until his upcoming court appearance on January 3.