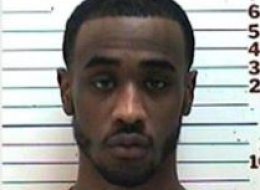 A 22-year-old man is behind bars after he allegedly killed a 5-month-old baby for crying during a football game.

Tre’viance Markese Walker of Oklahoma is charged with first-degree murder in the death of his girlfriend’s son, who has been identified only as “J.B.”

An affidavit states that J.B. died of head injuries he received on December 7 under Walker’s care at the man’s home in Norman. Walker allegedly told police that he was watching at the University of Oklahoma vs. Oklahoma State football game on TV when J.B. started crying, and Walker responded by picking up the infant so aggressively that J.B.’s head “snapped back.”

Then, officials say, Walker gripped the back of J.B.’s head before dropping him from a height of two feet, according to Fox 25.

Hours later, J.B. was found unresponsive in his playpen, News 9 reported. He had head trauma and blood in his ear.

Walker told police that he did not touch the baby, but later confessed.

According to neighbor Jimmy Shannon, Walker was frustrated because he lost $200 on the game.

“The baby wouldn’t stop crying so he went, allegedly, and picked up the baby with such force as to snap the baby’s neck,” Shannon told the station.

Our prayers go out to baby J.B.’s family.