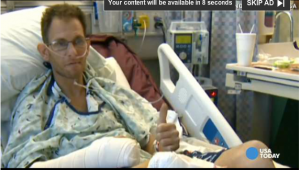 A Colorado man survived nearly a week in the mountains without food or water when he was trapped in a car wreck, laying on top of his dead friend.

Richard Koester, 36, was riding in the car with his friend Ronald Lee Mohr, 59, on a trip to Cripple Creek when Mohr, who was driving, suffered a medical emergency that caused their truck to roll off the highway and into a 30-foot ravine. Mohr was killed in the crash and Koester survived, but found he couldn’t move.

“I was laying on top of him the whole six days and nights. I had no idea he was with me when I woke up,” Koester told ABC. “That and a couple of other things kept me alive. He kept me a little warmer for a few extra days.”

Koester told 9News that one of the last things he remembered before the crash on Oct. 11, was wishing his daughter a happy early 13th birthday and asking her to stay awake for his phone call around midnight, on her actual birthday.

“I don’t remember too much,” Koester told 9News. “I remember waking up thinking I was in a dream.”

Koester was rescued after a lucky discovery by a state transportation official on Oct. 17, and a doctor later told him that his body temperature was only 79 degrees when he was brought to the hospital (according to the National Institute of Health, the average body temperature is about 98 degrees). The accident cost him both of his legs, some fingers and he’s had to undergo at least five surgeries.