Nelson Mandela’s widow Graca Machel, who barely left her husband’s bedside in the final six months of his life, on Tuesday made her first public appearance. 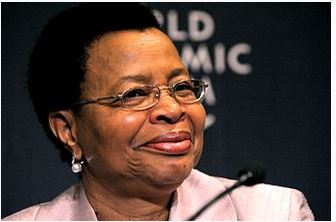 Graca who has hardly been seen in the wake of his death arrived at the Soweto satdium for his memorial, helped along by friends.

Wearing a black coat and dress, the Mozambican human rights campaigner linked arms as she made her way slowly into the bowels of the building.

Machel had maintained a near round-the-clock bedside vigil during the 84 days Mandela spent in a Pretoria hospital and the subsequent three months he spent at home before he died on December 5.

She had begun cancelling all but a handful of public engagements from June as Mandela’s condition deteriorated.

One of her rare public appearances came a month ago, when she was spotted at the premiere of the movie “Mandela: Long Walk to Freedom” tracing her husband’s journey from prisoner to president.