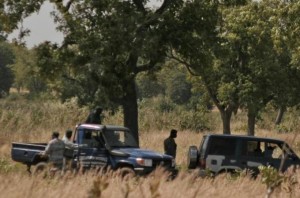 Authorities in Mali have found a mass grave believed to contain the bodies of 21 soldiers, a week after the ex-junta leader was detained in connection with suspected crimes by the army.

Prosecutor Daniel Tessougue said the bodies had been found at the site in the village of Diago near the southern garrison town of Kati, about 30 km north of the capital Bamako.

The remains are believed to be of soldiers who opposed the leader’s rise to power and their discovery paves the way for General Amadou Haya Sanogo to be charged with murder, Tessougue said.

Fifteen people, mainly soldiers from his inner circle, were arrested immediately after him.

A forensic team began the exhumation on Tuesday at 6 pm and finished unearthing the bodies at around 3 am on Wednesday, said Tessougue, who spoke to the Associated Press news agency by telephone.

The spot where the remains were found matches the place where witnesses said around 20 soldiers were shot and killed by troops loyal to Sanogo in May 2012.

“I went there myself to the spot, and we uncovered 21 skulls, which leads us to believe that we are dealing here with 21 bodies. The place still smelled bad,” Tessougue said.

“There were only pieces of bone, and the skulls. We also discovered metal chains inside the mass grave, which leads us to think that the people who were killed had been tied together with a chain,” he said.

In a move that has been applauded by the international community, the prosecutor arrested Sanogo last week, charging him with complicity in the kidnapping of his fellow soldiers.

Now that the bodies have been found, Tessougue says Sanogo will also be charged with assassination. Rights group Human Rights Watch called the arrest of the feared leader a “big step for justice.”