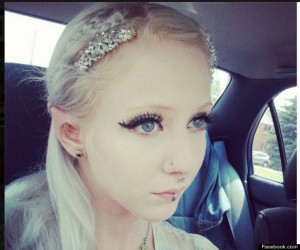 A 23-year-old Canadian model knows something about “elf esteem” after having her ears surgically modified to look like the mythical creature’s.

In August, 2011, Melynda Moon decided to get an operation that would make her ears look like a character from her favorite book series, “Lord of the Rings.”

“The elegance of the elf ear is something I adore,” she explained on a YouTube video documenting the surgery.

Moon, who lives in Guelph, Ontario, said the decision to change her elf, er, herself, was a long time coming. She believes she was a fairy in a previous existence.

“I have always been very close to nature. Pointed ears are the most adorable thing,and I find the ‘elven’ attire is so elegant,” she said, according to International Business Times. “I have always had fantasies about what it would be like to be something other than human, so I decided to change my appearance to look supernatural.”

The doctors who performed the $408 surgery skinned the tops of her ear cartilage,then skinned and cut pieces from the tips to form points. These tips were stitched together and removed a few weeks later after the ear skin was allowed to fuse, the Mirror reported.

Moon said the treatment left her “a bit uncomfortable the day after” and her ears “were really swollen and sore with a slight burning sensation.”

But she said it’s been worth it just for the reaction she gets from people.

“I have a handful of people assume I am dressed up because I have put on pointed ears,” she said, the Daily Mail reported.

“When I tell them they are real, they look pretty confused as if they are waiting for me to say ‘just kidding’ — but I am not.”

Moon admits that some parents have used her to keep their kids on Santa’s good side.

“Some people like to tell their kids to stop being bad because they know an elf will tell Santa they’re being bad,” she said, according to the International Business Times. “Then their children see my ears and realize their parents aren’t joking.”