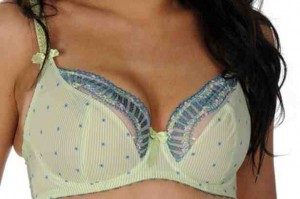 The smart lingerie monitors moods by measuring heart rate and breathing and can alert the wearer when it detects stress levels are rising.

If the bra senses that the woman is under extra pressure it sends a bluetooth signal to a smartphone warning her that she is in danger of reaching for a chocolate bar or the biscuit tin.

Aimed at teaching women how to recognise signs of stress so they don’t pile on pounds through comfort eating calorie0loaded snacks, scientists reckon they can help in the battle or the bulge.

The battery operated bra has sensors in the cups and side panels to check heart rate, changes in body temperature and breathing patterns and is being tested by volunteers.

Psychologist and senior Microsoft researcher Mary Czerwinski said: “It’s mostly women who are emotional overeaters and it turns out a bra is perfect for measuring the heart.”

Better known for computer software and the Xbox games console, Microsoft is taking on rival Sony in the innovative wearable technology market, with both technology firms battling to gain a foothold.

Microsoft’s stress-busting bra follows Sony’s announcement it is to patent a smart wig that can link wearers to gadgets from iPads and iPods to iPhones.