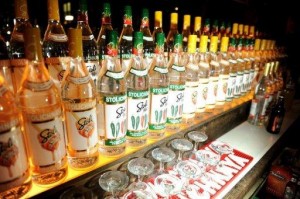 How many people have sent a text message they later regretted, blaming alcohol as the catalyst for an ill-advised communication?

Well, scientists at Canada’s York University have flipped the “message in a bottle” concept on its head, sending the world’s first text message through alcohol itself.

“We believe we have sent the world’s first text message to be transmitted entirely with molecular communication, controlling concentration levels of the alcohol molecules to encode the alphabet, with single spray representing bits and no spray representing the bit zero,” said Nariman Farsad, a York University doctoral candidate in charge of the experiment.

As the Voice of America explains, while the experiment was a first for humankind, it mirrors the communicative behavior exhibited by a number of other creatures, including bees, which use chemicals to transmit communications.

Another recent study found that some plants use fungi as chemical conduits to send their own warning messages to other plants.

And the scientists responsible for the communication say it could help advance communications around the world, particularly in areas like underground tunnels that do not have access to traditional wireless communication.

“For example, the recent massive clog in the London sewer system could have been detected earlier on, and without all the mess workers had to deal with, by sending robots equipped with a molecular communication system.”

The experiment’s findings were published in the latest issue of the scientific journal PLOS ONE.

Eckford and his team say the chemical communication worked transmitting the message four meters across their lab, using a simple tabletop fan to literally push the message forward. A receiver on the other end then picked up and translated the message.

The research could yield exciting results beyond personal communication. University of Warwick professor Weisi Guo, whose work helped launch the experiment, said it could have groundbreaking medical applications as well.

“They [molecular communication] can also be used to communicate on the nanoscale, for example in medicine where recent advances mean it’s possible to embed sensors into the organs of the body or create miniature robots to carry out a specific task such as targeting drugs to cancer cells.”