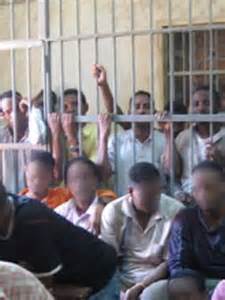 Over three hundred prisoners in Egypt have gone on hunger strike to protest against “ill-treatment” and the conditions they’re being held in.

The prisoners, who went on hunger strike on Monday, have said their cells are full of insects and that they are allowed to go outside for just half an hour a day. They also said there are up to 60 prisoners to a cell.

A Twitter account operated by Muslim Brotherhood, which has largely been driven underground by a massive crackdown, said prisoners have been “banned from family visits, legal counselling, medical care and (live in) overcrowded and unhygienic cells.”

Egyptian security forces have arrested thousands of Islamists, including virtually the entire top leadership of Morsi’s Muslim Brotherhood, since he was deposed on July 3.

The 85-year-old political and social movement prevailed in a series of polls following the overthrow of Hosni Mubarak in 2011, and Morsi became the country’s first freely elected leader after winning elections last year.

But his turbulent year-long rule was deeply polarising, and the military forced him from power after massive protests in which demonstrators accused him of betraying the 2011 “revolution.”

The Brotherhood said several senior figures were taking part in the strike, including the wealthy financier and onetime presidential hopeful Khairat al-Shater, senior official Essam al-Erian, former legislator Mohamed Beltagi and Essam al-Haddad, an adviser to Morsi during his presidency.

It did not say whether Morsi himself or the Brotherhood’s Supreme Guide Mohammed Badie were also taking part in the hunger strike.