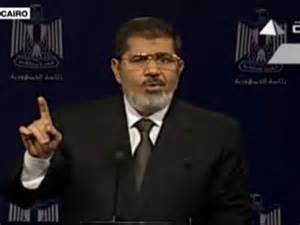 Egypt’s deposed President Mohamed Morsi will stand trial for escaping from prison during Egypt’s 2011 revolution, prosecutors announced, the latest in a growing list of charges against the former leader.

Morsi will be charged along with roughly 130 other people, including the senior leadership of his Muslim Brotherhood movement. They are accused of conspiring with the Palestinian Hamas and the Lebanese Hezbollah movement to arrange the prison break.

Members of both groups are also among the defendants, said Hassan Samir, the investigating judge, though did not name them.

The defendants face a number of charges, including murder, theft, and damaging public property.

Prosecutors began investigating the case earlier this year, while Morsi was president. In a statement, Samir said members of Hamas and Hezbollah entered Egypt through Sinai and made their way to Wadi Natroun.

Some 20,000 inmates escaped from Egypt’s prisons during the chaotic 18-day uprising that toppled longtime President Hosni Mubarak. More than half escaped from Wadi Natroun; 13 inmates were killed during the jailbreak.

This is the third set of charges brought against Morsi since he was overthrown by the army in July. He is already on trial for inciting the murder of peaceful protesters outside the presidential palace last December. Hearings began last month, with the next session scheduled for January.

Earlier this week, prosecutors unveiled espionage charges against the former president, accusing him of spying on Egypt for Hamas and Hezbollah. The charge sheet against Morsi called it “the biggest conspiracy” in Egyptian history.

Most of the other Brotherhood defendants are already in prison, having been arrested since Morsi’s ouster.

Brotherhood officials have, in the past, dismissed the allegations of conspiracy, calling them “absurd”. [AlJazeera]