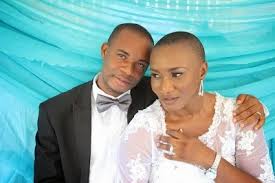 Ann and Silver got married on Saturday Nov. 9th after courting for several months.

“Yes he is (younger), with a few years. My husband and I do not share up to 5 years difference and he is not bothered about it.” Ann said in the interview

She also talked about how they met and how he proposed.

How did you meet your husband?

My husband, Silver Ijieson is a lecturer. I met him at a lecture organized by the University of Lagos some 3 years back. Dr. Barclays Oyakeruma was supposed to give a lecture that day titled, ‘Nollywood and its effect on globalization’. My colleagues who were at the lecture encouraged me to come back and further my studies, I gave the excuse of no time. But Dr Oyakeruma urged me to enroll so as to broaden my knowledge. So a senior colleague of mine, Martins Odaji introduced me to my husband and we exchanged pleasantries and he said that if I needed help with my studies, I should not fail to call on him. A year later we met at the point of registering for my program.

When did he propose?
He proposed to me early this year; he just said he was going to marry me. I took it for granted, like he was just joking about it. I never saw the possibility because then he did not know much about me. I thought he just saw a woman he could exchange a lot of ideas with. He proposed to me properly seven months later, he gave me a ring. He was shaking all over like a leaf. He is light complexioned, so as he was proposing, he was all read. I love him so much because he is very courageous.

Do you regret your first marriage?
Regret it? My daughter is taller and finer than I am. She is the headgirl of her school. In less than 2 weeks, she is going for a photo shoot. At 16, she has started earning money. She is writing for a magazine and you ask if I regret it? I thank him (Segun Arinze)!! Without him I would not have met my Silver.

Are you not afraid that your marriage might crash again?
No! I reject it. We have our differences, just like other couples do, but it is not enough to say, we no do again. Before we got married, we told ourselves that divorce and separation are no option.