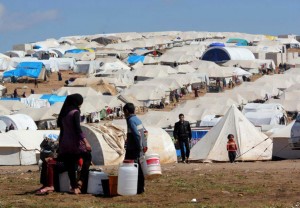 United Nations agencies have launched what they say is the biggest-ever relief appeal for a single emergency, as they called for $US6.5 billion (about N1trn) in funds for Syrians in 2014.

The UN’s humanitarian affairs and refugee agencies said on Monday that $US2.3 billion is needed to provide for people inside the war-torn country, with the remainder for Syrian refugees in the region.

“We’re facing a terrifying situation here, where, by the end of 2014, substantially more of the population of Syria could be displaced or in need of humanitarian help than not,” UN High Commissioner for Refugees Antonio Guterres said in Geneva.

“This goes beyond anything we have seen in many, many years, and makes the need for a political solution all the greater.”

The agencies warned that they were planning for up to 4.1 million refugees by the end of 2014 – of a total pre-war population of 22.4 million.

More than 2.3 million Syrians have so far fled the country since the conflict began in 2011, with more than four million estimated to be displaced inside its borders.

The UN’s World Food Programme (WFP), one of the bodies participating in the multi-agency plan, separately announced it would feed 4.25 million Syrians next year, at a cost of $US2 billion.

It pledged to focus on preventing child malnutrition, giving food supplements to 240,000 children aged 6 to 23 months.