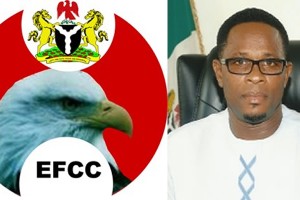 Governor Rochas Okorocha of Imo State has scoffed at the purported clearance of his impeached Deputy, Sir Jude Agbaso, by the Economic and Financial crimes Commission (EFCC) over alleged N458 million bribe, saying it was not only mischievous of the anti-graft agency to do so but also self-serving.

He also accused the EFCC of indifference over the state government’s request to investigate the missing N67 billion allegedly misappropriated by his predecessor in office, Ikedi Ohakim.

Information Nigeria recalled that Agbaso was removed from office by the State House of Assembly in March 2013, after a seven-man panel headed by Justice G.C Ihekire concluded its investigations into an allegation of graft leveled against him.

To clear his name of the allegations, Agbaso had petitioned the EFCC requesting it to ascertain if indeed he collected any bribe from a road contractor in the state.

In its response contained in a statement signed by the Director of Operations, Mr. Olaolu Adegbite, EFCC said it found no document or written statement that linked Agbaso to any bribe.

But speaking at a media briefing in Owerri, the state capital, Gov. Okorocha noted that the EFCC lacks the powers to clear anybody as that was the responsibility of the court.

“I have not heard that the EFCC now has the power to clear anybody of gross misconduct, as the only institution vested with such authority to clear Jude Agbaso of misconduct is the court of law and not the EFCC,” he stated.

Okorocha stated that the EFCC had hurriedly whisked away the Managing Director of J-Pros, Mr. Joseph Dina – alleged to have bribed Agbaso, who also doubled as commissioner for works – a day to his appearance before the investigative panel, adding that ever since, he had not been brought back to the state to answer to the charges of fraud filed against him at the High Court by the state government.

“We did not award any contract to Jude Agbaso but to J-Pros and we want the EFCC to bring him back from wherever they are hiding him,” Okorocha said.

On the EFCC’s purported refusal to investigate the administration of former governor Ohakim over N67 billion allegedly misappropriated, Okorocha stated, “We reported to the EFCC about the missing N67 billion, which was misappropriated by the administration of Ikedi Ohakim, but as I speak to you, neither the EFCC nor the ICPC has done anything about the matter. It seems that those who have connections with the Presidency cannot be probed by the EFCC or the ICPC and that is why they have kept mute. Unfortunately, the same anti-graft agency that has refused to probe the looting of the state treasury by the government of Ohakim has been harassing the officials of my government on continuous basis; so we decided to take our case to the court of public opinion, as our only option, since we do not have control over them”.

The Imo State governor accused the EFCC and the ICPC of being used as a tool of political victimization of perceived opponents of the Presidency, adding that the state had been left with no other option but to establish its own anti-graft agency to enable it tackle the cases of official corruption in the state.

“Since it is obvious that the EFCC is now a tool of political witch-hunt against perceived opposition to the presidency, we have already concluded plans to establish our own anti-graft agency, which will be known as the Imo Economic and Financial Crimes Commission to help us tackle the problem of official fraud in the state”.