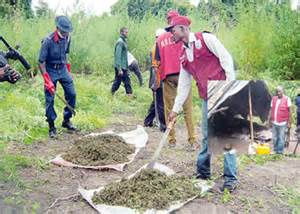 The Chairman, National Drug Law Enforcement Agency (NDLEA), Alhaji Ahmadu Giade, Friday disclosed that the Agency had destroyed  145,869.525 kilogramme of substances suspected to be Cannabis sativa and psychotropic drugs in 2013 across the country.

Giade made the disclosure in Ado Ekiti during a public destruction by burning of 11.5 tons of cannabis seized from drug syndicates within Ekiti State .

Represented by the Director General of the Agency, Mr Femi Ajayi, the NDLEA boss, said over 1,118 suspected drug traffickers with 35, 606 kg of drugs, mostly cannabis have been discovered in the last twelve months, with NDLEA recording about 49 high profile convictions.

He regretted how large expanse of lands that could have been used for the production of food and cash crops were being diverted for production of dangerous weeds, he said were capable of ruining the lives of the Nigerian youths. According to him, the Agency had detected and destroyed 875 hectares of cannabis farm in Ekiti in 2013, advising that “we must explore every strategy to promote the cultivation of for and economic crops instead of cannabis”.