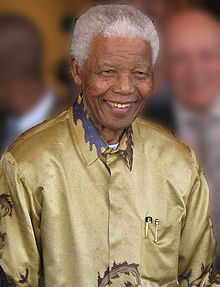 Confirming his death, South Africa’s president, Jacob Zuma addressed the nation to inform them of the passing of Nelson Mandela at 95 years old.

A sombre Zuma said, “Fellow South Africans, our beloved Nelson Mandela, the founding president of our democratic nation, has departed. He passed on peacefully in the company of his family around 20:50 on the 5th of December, 2013. He is now resting. He is now at peace. Our nation has lost its greatest son.”

“We saw in him what we seek in ourselves. And in him we saw so much of ourselves,” he said. “Nelson Mandela brought us together and it is together that we will bid him farewell.”

Zuma announced that all flags will fly at half-mast from tomorrow until after the state funeral.

Zuma reminded his nation, “As we gather to pay our last respects, let us conduct ourselves with the dignity and respect that Madiba personified.

“Let us be mindful of his wishes and the wishes of his family.

“Let us commit ourselves to strive together? to build a united, non-racial, non-sexist, democratic and prosperous South Africa,” Zuma said.

Mandela’s respiratory problems in recent years may be connected to his imprisonment, when he contracted tuberculosis after working in a prison quarry. He had been in hospital in recent months.

His hospitalization on June 8, 2013, marked his fifth visit to hospital in two years. In April 2013, he spent 10 days in hospital after being treated for pneumonia.

He had been receiving intense home-based medical care for a lung infection after three months in hospital.

Mandela was a prominent international figure for more than half a century, first as a leading human rights campaigner in South Africa and then as the world’s best-known political prisoner.

Following his release, he again became the leader of the anti-apartheid struggle, and in 1994 became the first president of a democratic South Africa.

On July 18, 2009, the first Mandela Day declared by the United Nations, UN Secretary General Ban Ki-moon spoke about how “Nelson Mandela has made a lasting imprint on our lives.”

Mandela’s body will be moved to a mortuary in Pretoria, and the funeral is likely to take place next Saturday.

The Nobel Peace Prize laureate was one of the world’s most revered statesmen after preaching reconciliation despite being imprisoned for 27 years.

He had rarely been seen in public since officially retiring in 2004. He made his last public appearance in 2010, at the football World Cup in South Africa.