The sign language interpreter at Nelson Mandela’s memorial service was “a fake who merely flapped his arms around during speeches”, South Africa’s deaf community has said. 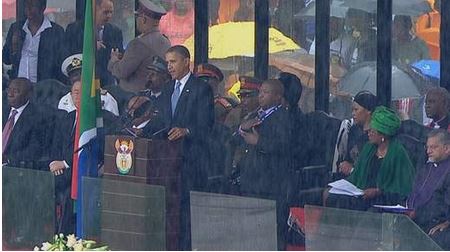 South Africa’s deaf federation has confirmed that an interpreter using sign language during the Mandela memorial was a “fake”.

Concerns over the male interpreter had been raised by deaf people watching the service at Johannesburg’s FNB Stadium on Tuesday.

Bruno Druchen, national director of the Deaf Federation of South Africa, said the unidentified man who was on stage alongside world leaders including US President Barack Obama, “was moving his hands around but there was no meaning in what he used his hands for”.

South African parliament member Wilma Newhoudt, a member of the ruling party, also said the man communicated nothing with his hand and arm movement.

“He wasn’t even doing anything, There was not one sign there. Nothing. He was literally flapping his arms around.”

The interpreter, who translated US president Barack Obama’s speech, looked as if he was “trying to swat a few flies away from his face and his head”.

“The deaf community in South Africa are completely outraged and nobody knows who he is,” Ms Loening said.

“We can’t find a name or anything. The organisations who have accredited interpreters do not know him at all.”

The government organisers of the event, as well as broadcaster SABC, could not immediately be contacted.

The revelation also raises concerns over security for world leaders

South African sign language covers all of the country’s 11 official languages, according to the federation.

Attended by almost 100 sitting and former heads of state, the speeches at Mandela’s memorial were supposed to be interpreted into sign language for deaf viewers.

The man also failed to indicate that the crowd was booing Jacob Zuma.

Delphin Hlungwane, an official South African sign language interpreter with DeafSA, said authorities were trying to track the man down.

You’re supposed to indicate with your facial expressions, even if it’s not an exact sign. He didn’t indicate that (booing of Jacob Zuma) at all.

It just passed him by. Nobody knows who he is. Even at this hour we still don’t have his name.”

The government communications office said a statement would be put out shortly.