In Qunu village, the place where Nelson Mandela spent his childhood, the residents are solemnly preparing for the final return of their beloved son, who will be laid to rest among them a week from now, December 15, 2013, Sunday. 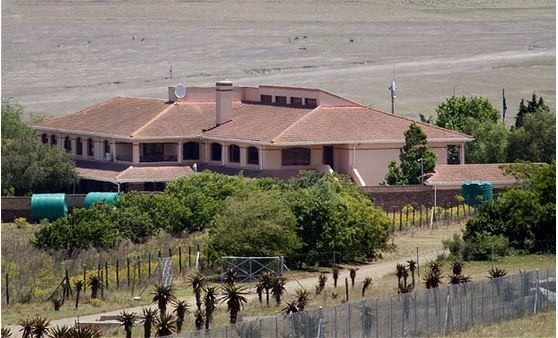 Nelson Mandela’s house in the village of Qunu Photo: AFP/GETTY

Elderly men in the picturesque village dotted with traditional round huts bow their heads and lower their voices when they speak of the anti-apartheid hero who has “returned to his ancestors”.

Here there has been no explosion of public emotion, as seen in Johannesburg, no singing to celebrate Mandela’s 95 years, no all-night vigils.

His home, overlooking the hills and valleys of the Eastern Cape, where Mandela said he spent his happiest childhood days, is sombre and eerily quiet.

“We are in mourning, he deserves our greatest last respects,” said Chief Mfundo Mtirara, Mandela’s nephew, who had to fulfil the difficult task of delivering the news of Mandela’s death to some close relatives.

“A great man is gone, we are deeply saddened, even though we knew that this day would come.

“He deserved our respects while he was still alive, we are going to continue to give him that respect even in death,” Chief Mtirara, who lives near Mandela’s homestead, added.

The town will next week hold a public memorial service for the revered leader, affectionately known by his clan name, Madiba.

Chief Mtirara said a delegation from the village, including Dalindyebo, the king of Mandela’s Thembu clan, will travel to Johannesburg on Saturday to meet members of the Mandela family and hear about burial plans.

At the estate that Mandela built after his release from prison in 1990, armed soldiers and policemen stand guard.

The busy road near the house has been closed to traffic in preparation for the influx of luminaries and mourners expected to descend on this rural village.

Motorists have been diverted to dusty back roads.

Pipe-smoking old men idled along the village’s many footpaths, often stopping to chat to peers about Madiba’s passing.

“He was given to us by the ancestors, now he has returned to them.

“The old man lived a long and difficult life, but it was that difficulty that brought us freedom. Now it’s time for him to rest amongst his people,” said Albert Njokweni, a shepherd.

“I don’t think this village will ever see a person like him again. We are thankful to have called him one of our own,” he added.

In the nearby town of Mthatha, where Mandela went to school and which has a museum dedicated to him, flags are flying at half mast, with posters of him hanging from lamp posts.

A local supermarket displayed a large image of the anti-apartheid icon with the message: “Rest in peace Nelson Mandela. You were a legend, a father and most of all our leader.”

Despite his global icon status and years of isolation at Robben Island prison, Mandela never lost touch with his traditional roots.

Of royal lineage, he once arrived in court during his Rivonia trial decked out in full Xhosa regalia.

Mandela returned after 27 years in prison as a free man to Qunu, where his parents and children are buried in a family graveyard.

President Jacob Zuma announced a 10-day mourning period for Mandela. His body will lie in state in Pretoria for three days after that before the burial in Qunu on December 15, 2013, Sunday.

That is the day, the villagers say, will be the hardest.