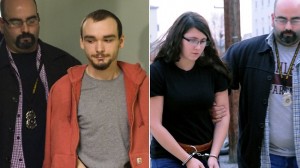 Two Pennsylvania newlyweds used a Craigslist escort ad to lure a married engineer to his bloody doom — just for the excitement of stabbing and strangling him, authorities charge.

After the random killing, the couple allegedly celebrated at a Harrisburg strip club, the New York Post reported.

It was their dream to murder someone together — and it may not have been the first criminal caper for Elytte and Miranda Barbour, say police in the sleepy town of Sunbury, some 240 kms northwest of Philadelphia.

“This is the worst murder I’ve seen,” said Sunbury Police Chief Steve Mazzeo, who has headed the local force for six years.
Victim Troy LaFerrara was stabbed some 20 times behind a garage, police say.

“The death may have circumstances that will lead the investigation of the Barbours to other states,” Mazzeo added.

The 18-year-old brunette bride has an 18-month-old daughter and works as an escort, according to her husband. The groom, 22, is a dishwasher. Both are from central North Carolina.

They had been married only three weeks when LaFerrara answered Miranda’s ad offering “companionship” for a price.

Police and court records say he agreed to meet Miranda at the Susquehanna Valley Mall at around 6:30 pm on November 11.

“Alright, I’m pretty close to the mall,” she allegedly texted the man, a more-than-113kg environmental engineer whose wife, Colleen, was soon to be a widow.

“I’m dropping my daughter off right now, then I’ll be at the mall in about 15,” Miranda answered, according to court records.

When LaFerrara climbed into Miranda’s red Honda SUV, Elytte was allegedly hiding in the back seat — under a blanket.

Here’s where the accounts of LaFerrara’s final moments ­diverge.

Miranda has told cops that as she drove, the engineer “began groping her,” according to the criminal complaint.

“She related he was touching her private areas and had his hand around her throat,” the complaint says.

Miranda went for the knife “and started stabbing the victim,” the complaint continues.

“She related [that] the first two or three times she stabbed him there wasn’t any reaction. She then started blacking out and didn’t remember the rest of the time she was stabbing him.”

But cops say it was Elytte who struck first, pouncing from ­beneath the blanket and snapping a belt around LaFerrara’s neck so his wife could more easily swing her knife, according to the New York Post.

The engineer was “choking and gasping for air” as she drove around, looking for a secluded spot to dump the body and clean her car, Miranda allegedly told cops in a confession.

“There was a lot of blood,” she allegedly said.

“She then returned to her residence,” her confession continues, “where she and her husband departed for Harrisburg to celebrate his birthday” at a strip joint in the city.

Elytte was more forthcoming, telling investigators “that they committed the murder because they just wanted to murder someone together,” according to his own police affidavit.

He and Miranda had planned to kill before, but it just never worked out — until LaFerrara came along, he explained.

After his wife’s arrest, but prior to his own, Elytte told The Daily Item of Sunbury that Miranda, whom he married on October 22, regularly hired herself out as a “companion” to men she found online.

Elytte said his wife was paid $50 to $850 for meeting with men for such activities as dinner together or walks around a mall.

“She is not a prostitute,” he said. “What she does is meet men who have broken marriages or have no one in their lives, and she meets with them and has delightful conversation.”

LaFerrara, too, was a frequenter of strip joints, the paper reported. “He was just a big goofball,” one dancer told the paper.