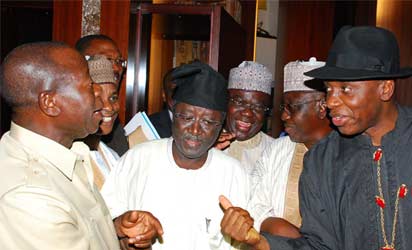 The Nigeria Governors’ Forum, NGF, led by the Governor Chibuike Amaechi of Rivers State has invited members of the faction led by the Plateau State Governor, Jonah Jang, to a meeting slated for Wednesday (today) in Abuja.

According to the invitation sent out to the governors, the meeting will hold by 8 p.m. at the Rivers State Governor’s Lodge.

According to the invitation signed by the Director General of the Forum, Ashishana Okauru, the issues to be discussed include remembrance of the late governor of Kaduna State, Sir Patrick Yakowa, who died in a plane crash on December 15 last year, report of the recent NGF retreat in Sokoto, land allocation in Abuja, pending litigations and inaugural speeches.

Other items on the agenda for discussion are report on the Federal Account Allocation Committee, FAAC, Excess Crude Account, ECA, Sovereign Wealth Fund, SWF, update on SPRM, polio Eradication, funding of NGF and its strategic plan for 2014 to 2016.

According to the invitation, Mr. Amaechi, as the Chairman, would brief the meeting before discussions on the issues commence.

Wednesday’s meeting would be the first since Amaechi and four other Peoples Democratic Party, PDP, governors defected to the opposition All Progressives Congress, APC, on November 26.

The other governors that joined the APC train are Kwankwaso, Wamakko, Nyako and Ahmed.

The NGF had been sharply divided since May 24 following some governors’ rejection, allegedly on instructions from the Presidency, of Mr. Amaechi’s emergence for a second term after he floored his Plateau State counterpart, Mr. Jang, by 19 votes to 16.

It is yet to be seen whether Wednesday’s meeting will have at least all the governors in Mr. Amaechi’s camp in attendance because since his re-emergence as chairman of the forum, he has not been able to garner the presence of the 19 governors, who allegedly gave him their mandate, thereby fueling speculations within the Presidency that he did not actually win the controversial May 24 NGF chairmanship elections.

Interestingly, Mr. Jang too has not been able to gather the highest number of governors in his own faction of NGF meeting which has held twice.