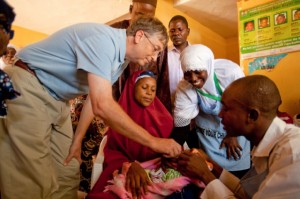 Chairman of Bill & Melinda Gates Foundation, Mr. Bill Gates, has said the unrest in the northern part of the country is hampering his foundation’s awareness and eradication campaign against polio virus in the country.

Gates, who made the remarks yesterday when he visited Governor Babatunde Fashola of Lagos State in Ikeja, said half of the children in the North-Eastern part of the country were yet to be vaccinated as a result of unrest in the area.

Accompanied on the visit by President of Dangote Group, Alhaji Aliko Dangote and top functionaries of the foundation, Gates commended the leadership role of the governor especially in transforming the state in the last seven years.

He disclosed that his foundation in partnership with Dangote Foundation had raised $6 billion to fight polio virus in some countries such as Nigeria, Pakistan, Afghanistan, Somalia and Syria, which he said, were still plagued with the virus.

Gates, however, expressed optimism that the virus would be eradicated, noting that he had partnered the Dangote Foundation to kick polio out of Africa.

In his remarks at the occasion, Fashola said: “The tragedy of the existence of wild polio virus in this part of the world as one of the few parts is something we are not proud of.

“However, I think we are in the march towards eradicating the virus. We have not put the voices of the survivors in the forefront of the campaign and that the voices of the policy-makers have drowned those of the victims themselves,” he noted.