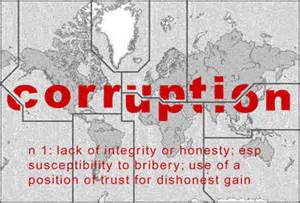 Afghanistan, North Korea and Somalia are seen as the world’s most corrupt countries while Denmark and New Zealand are nearly squeaky-clean, with Nigeria ranked 144th, graft watchdog Transparency International said in a survey Tuesday.

Worldwide, almost 70 percent of nations are thought to have a “serious problem” with public servants on the take, and none of the 177 countries surveyed this year got a perfect score, said the Berlin-based non-profit group.

Transparency International’s annual list is the most widely used indicator of sleaze in political parties, police, justice systems and civil services, a scourge which undermines development and the fight against poverty.”Corruption hurts the poor most,” lead researcher Finn Heinrich told AFP.

“That’s what you see when you look at the countries at the bottom. Within those countries, it’s also poor people who get hurt the most. These countries will never get out of the poverty trap if they don’t tackle corruption.”

Among countries that have slipped the most on the group’s 2013 Corruption Perceptions Index are war-torn Syria as well as Libya and Mali, which have also faced major military conflict in recent years.

“Corruption is very much linked to countries that fall apart, as you see in Libya, Syria, two of the countries that deteriorated the most,” said Heinrich.

“If you look at the bottom of the list, we also have Somalia there. These are not countries where the government is functioning effectively, and people have to take all means in order to get by, to get services, to get food, to survive.”

Heinrich said Afghanistan, where most NATO-led Western forces are pulling out next year after a more than decade long deployment, is “a sobering story. We have not seen tangible improvements”.

“The West has not only invested in security but also in trying to establish the rule of law. But there have been surveys in the last couple of years showing the share of people paying bribes is still one of the highest in the world.”

Also at the bottom of the list is North Korea, “an absolutely closed totalitarian society”, said Heinrich, where defectors report that famine is worsening corruption “because you have to know someone in the party who is corrupt in order to even survive”.

Among the “most improved” countries, although from a low base, was Myanmar, where a former military junta has opened the door to the democratic process and, facing an investment boom, has formally committed to transparency and accountability rules.

“That’s the only way countries can avoid the ‘resource curse’, where the resources are only available to a very small elite,” said Heinrich. “Nigeria and other oil-rich countries are obviously very good examples.”

Huguette Labelle, chair of Transparency, said “all countries still face the threat of corruption at all levels of government, from the issuing of local permits to the enforcement of laws and regulations”.

The group says that because corruption is illegal and secretive, it cannot be meaningfully measured.

Instead Transparency collates expert views on the problem from bodies such as the World Bank, African Development Bank, Economist Intelligence Unit, Bertelsmann Foundation, Freedom House and other groups.

It then ranks countries on a scale of 0-100, where 0 means a country’s public sector is considered highly corrupt and 100 means its is regarded as very clean.

The latest survey “paints a worrying picture”, said Transparency. “While a handful perform well, not one single country gets a perfect score. More than two-thirds score less than 50.”

At the top, between 80 and 89, aside from Denmark and New Zealand, were Luxembourg, Canada, Australia, the Netherlands, Switzerland, Singapore, Norway, Sweden and Finland.

The following is a list of the top- and bottom-ranked 10 nations on graft watchdog Transparency International’s annual Corruption Perceptions Index, released on Tuesday.

The index score relates to perceptions of the degree of corruption as seen by country analysts and business people and ranges between zero, which is highly corrupt, and 100, which is very clean.