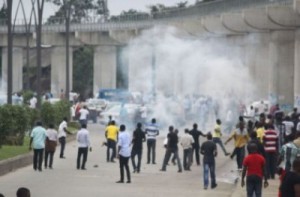 Attorney-General and Commissioner for Justice in Delta State, Mr Charles Ajuyah, SAN, weekend, said that the state government was committed to ensuring that normalcy returned to Kokori town in Ethiope East Local Government Area of the state in no distant time.

Ajuyah, who said that the government was on top of the situation in Kokori Town, made this known while reacting to a recent media publication in Warri.

He said that the state government was closely monitoring the activities of security agents drafted to Kokori by the Federal Government. He condemned the call by some members of Kokori Progress Union, Lagos, for the withdrawal of security agents from Kokori, noting that such call was not only misinformed but premature.

He also condemned the actions of some indigenes of the community, who staged a protest at an Abuja High Court, calling for the release of an alleged kidnap kingpin, when he was being legitimately tried before a court of law.

According to Ajuyah, the presence of the military personnel was yielding good results as arms and ammunition were being recovered, while some suspects had been arrested.

“It must be stressed that the presence of security personnel is still essential and only those who have things to hide that should be worried. I wish to add that the security agencies will not rest on their oars, adopting acceptable rules of engagements until the last of the remnants of the trouble makers are arrested.

“I appeal to members of Kokori community to give useful information to the security agencies and not to shy away from condemning the deviant behaviour of persons, who go about supporting crimes and criminality. ‘Innocent indigenes and persons living or working in Kokori are advised to go about their normal activities without fear as the government is concerned about their well-being.”