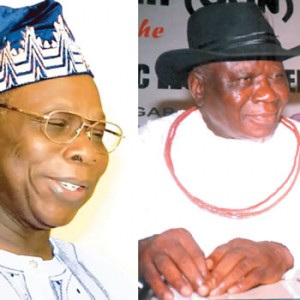 Former Federal Commissioner of Information and elder statesman, Chief Edwin Clark has urged President Goodluck Jonathan to reply and address the allegations contained in a letter former President Olusegun Obasanjo wrote to him in the national interest.

Clark, who was speaking with journalists at the Nigeria Centenary Lecture in London on Tuesday, said that the allegations, “though false”, were too weighty for the president to ignore.

“Jonathan should reply the letter not because of Obasanjo, but for the sake of Nigerians”, the Ijaw national leader said.

The 18-page letter written to President Jonathan by the former president has continued to generate reactions from cross-section of Nigerians with opinions divided over whether the incumbent should reply Mr. Obasanjo or ignore the contents of the letter altogether.

Clark, who prides himself as Mr. Jonathan’s political god-father, said Mr. Obasanjo’s letter showed disrespect to the person and office of the President.

“My advice is for Jonathan to remain firm and strong as the President of Nigeria, and continue with his transformation agenda”, he added.