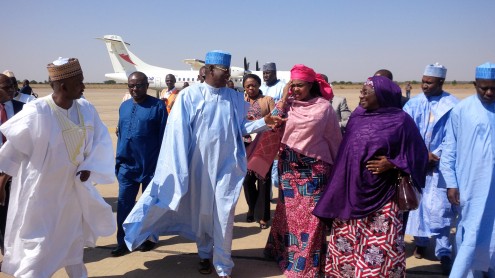 Perhaps as part of President Goodluck Jonathan’s moves to reward Gov. Sule Lamido for not joining five of his colleagues in the New PDP to defect to the opposition All Progressives Congress, APC, the Minister of Aviation, Mrs Stella Oduah, on Monday inspected the N11 billion Dutse International airport in Jigawa.

The minister, who undertook the inspection when she visited the ongoing project of the airport, said the airport had a three-metre runway.

She said the essence of the airport was to improve the lives of Jigawa people and to ensure that commerce and connectivity were prioritised using the airport as a platform.

“It is the vision of Mr President to mainstream aviation to accomplish several economic purposes.

“The airport will also deal on perishable items; Jigawa should be our perishable hub for this area and we have huge plan for perishable cargo,’’ Oduah said.

The minister urged other state governments to emulate Gov. Lamido, adding that the feat was achieved in record time.

According to her, President Jonathan, eight months ago, laid the foundation of the airport and that the project was now almost at the stage of completion.

She said that an aircraft had already taken off from the airport.

“Mr President’s aircraft once took off from the airport, it is a three metre-runway and it is one of the best we have.

Gov. Sule Lamido said that the project was worth N11 billion and would be completed in few months.

Lamido said that the project was for one year.

“This airport started in February this year and will be completed in few months”.